This page describes how to collect data from the ship's network with a computer.

Many manufacturers use their own proprietary connectors or protocols but most of them may be used with a standard connector and protocol. The following section describes how to attach certain devices in an efficient way. An introduction to computer connectors and connectors from the ship's network is given first as they work in different ways.

The manufacturers of navigation devices take great care to protect their devices from dirt and water so that in case of capsize or flooding the devices have a chance of surviving. Computer connectors should be constructed in such a way that a short circuit does not affect the ship's network. Good connector hardware will utilise galvanic isolation as a safeguard.

Data bytes are transferred asynchronously without flow control which means that each byte must be actively processed as soon as it arrives at the receiving end. 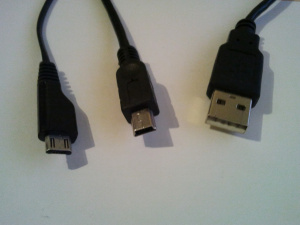 This connector is the successor of the serial connector and reduces the amount of required panel space and operates at much higher bit rates.

Most laptops have a type A connector. Most smart phones have Mirco USB connectors. Other small devices often use a Mini USB connector that is of an intermediate size.

The transmission of data from sensors is usually handled via a com port emulator that is installed in the operating system. This means that old software may still use the virtual com port and does not need to look after usb devices. Smart phones do not have such a device common access point which is why usb devices have to have a special driver for the smartphone operating system.

Ethernet has become a synonym for network connection. Most of the data transfer on the internet passes over this kind of interface. It is a packet oriented protocol that transfers many bytes at once. Ethernet connections are currently not used very often in marine equipment but some AIS devices do have an ethernet connector.

Many smart phones and computers support this wireless network protocol. Technically it is based on ethernet and offers high bandwith with packet oriented data transfer. The wireless nature and the wide support of devices made it the choice for some manufacturers to equip latest devices with such an interface.

The manufacturers advertise their products with standard conformance but most of them do NOT fully comply with them. There are many manufactur specific variants built into the protocol or connector system. The reasoning is an economic one: Manufacturers try to bind customers to their products by setting obstacles to switch to another system from another vendor. A technical reason for using almost-standard devices is of course the ever lasting process of standardization that may take years to complete. The customer has to suffer from this as he must buy expensive adaptor cables in order to connect the "standardized" devices.

Raymarine devices were built into many european ships mainly because major vendors like Bavaria had contracts with Raymarine.

SeaTalk is a Raymarine proprietary serial protocol that is used by marine instruments to exchange data [1]. As the protocol itself is closed source two options are available:

These gateways may be used to convert to NMEA 0183. 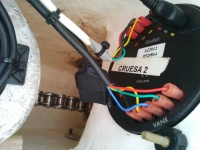 Raymarine Device from the back. At the top the cabling with clamps and a SeaTalk-1 cable can be seen 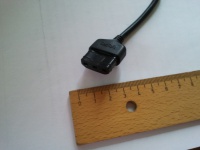 SeaTalk-1 is a bus, therefore all devices are connected in parallel. Most devices have two connectors so that devices can be daisy-chained. At the end of the bus a connector is free which may be used. Sometimes the bus ends at the plotter which does have only one plug where the other end is attached to the battery. In that case no free connector will be available and a Seatalk-1 junction box (Raymarine D244) must be used to attach a further device. The plug has three pins and is always female.

SeaTalk-NG (Next Generation, former: SeaTalk²) is based on NMEA-2000 or CAN. The packet oriented protocol provides a bandwidth of 250 kbit/s. Data is being transferred as standardized NMEA-2000 / CAN Frames. Wiring is done through backbone cable which must be terminated by a resistor at each and. Devices are attached by adding T-connectors to the backbone. A connection to a PC may be established through a Raymarine converter. Alternatively adapter cables are available that converts the backbone cable to a standard NMEA 2000 cable. There an NMEA-2000 to USB or Bluetooth or WLAN adapter device may be attached. Such a device is offered by Actisense (NGT-1). Note: A second NMEA-2000 to SeaTalk NG adapter cable with opposite pinout or a NMEA2000 terminator is necessary in order to terminate the bus correctly. 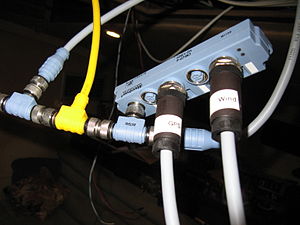 SeaTalk-HS (High Speed) is a Ethernet-based protocol. It is used where the bandwidth of the CAN bus does not suffice. Usage examples are Raymarine displays connected to each other or radar downlinks. Not much is known about this procotol except it is based on ethernet. No reverse engineering of this protocol is known or documented yet. However it is likely that it is an IP based protocol stack.

A frequently used device is the C-70 which nowadays is being built in a new version. The installation manual may be found here Raymarine. On page 27 (PDF:33) you may find the available connectors. The described SeaTalk² protocol was renamed to SeaTalk-NG. The device therefore offers SeaTalk 1 and SeaTalk NG. You have three options to attach a computer:

Example for connecting a computer via SeaTalk 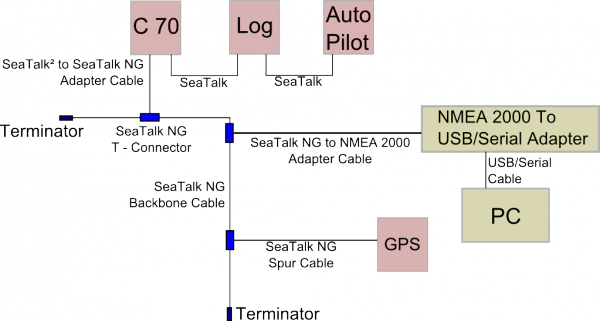 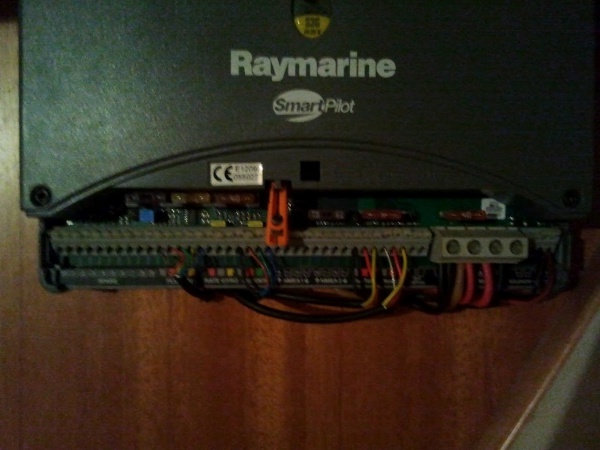 Connectors of a Raymarine auto-pilot. SeaTalk goes in and out (to the right), NEMA in und NMEA out are not connected.

Lowrance has colour coded connector cables. The blue network was sold from 2005 to 2006. The red network has been sold since 2006. Using an adapter cable, blue networks may be attached to red networks.

Garmin uses the standard NMEA-2000 cables and connectors. Devices may be attached to a PC with a common NMEA-2000 to USB converter.