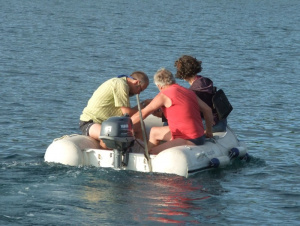 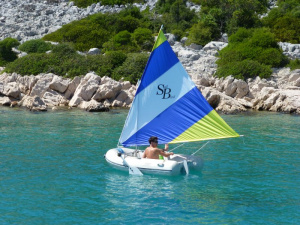 During the development cruise in Croatia, a mobile measuring unit was built
to measure shallow water depths in bays, harbors and marinas with the dinghy,
i.e. when the ship is at anchor or at the pier.

The encoder rod we have built from a V2A square tube 20x20.
Bottom is a steel plate for mounting the encoder screwed.
The rod with a screw clamp screwed to the stern board of the dinghy.

Professional mounting clamp 20 € (Construction manual)
Transducer rod with clamp 55 € (Picture)
Screw transducor plate onto a "plastic" household cutting board. Fix it permanently to the stern of the boat with Sika.
Mobil: fasten rod with suction cup 5 € /suction lifter. Screw directly to flat hull surface, or Plexiglas pane at the stern of the boat, or fasten with Sikaflex. Suction cup holds perfectly.

Cheaper and better than an old handheld GPS is a GPS module, for example a Ublox-NEO-6M.

The NEO-6M has a different output level than the logger. Therefore you need a TTL>RS232 converter in between.
For both you need a voltage converter from 12V battery to 3.3V operating voltage.

The NEO-6M transmits TTL level. The logger can receive RS-232 and RS-422. Both interfaces are standardized. RS-232 uses -12V for a logical 1 and +12V for a logical zero. The RS-422 does it similarly only that there current is used for the distinction. So -20mA for a 1 and +20mA for a zero. If you would connect the GPS module directly, the voltage would be much too small and the signals for 0 and 1 would be mixed up. TTL RS-232 works with 5V or 3V3 and a 1 always means +5V (3V3) and a zero means 0V. Reversing the polarity is of limited help. It could even lead to a short circuit, which would damage both devices. Therefore use at least one RS-232 driver. 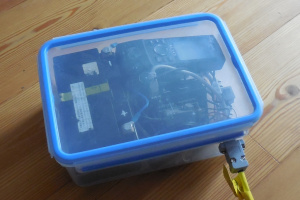 Attach battery to the bottom with Velcro strips, use illuminated toggle switch for power supply.
Connect and interconnect GPS, depth sounder and logger.
Lead connection for depth sounder transducer with RS-232 out of the box.
(connector must be screwable so that it is not unintentionally pulled out during operation). 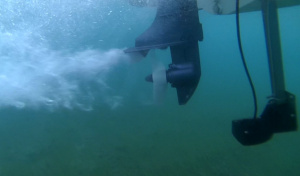 Turbulence due to screw

Transducer rod attached to dinghy stern with screw clamp. Screw clamp and rod secured with tie so that they do not go diving.

Adjust the transducer so that it is not in the screw current of the outboard screw (echo sounder does not work in air turbulence).
Mount transducer on starboard side of propeller (less turbulence with right turning propeller).

Attention
Transducer is the lowest point (not the outboard screw!) - so be careful when mooring!
Fasten the transducer cable to the transducer rod in such a way that it cannot be pulled into the screw ;-)