SMED-2 is the successor of SMED (SeaMapEDitor).

This editor will provide the means to tag all of the OpenSeaMap S57-based objects, relieving the mapper from the need to learn all the tags and valid values. It will incorporate the OpenSeaMap renderer, which will display the actual map renderings as an imagery layer in the JOSM map display panel, replacing the existing MapPaint style. It will eventually provide the means to import and export ENC files as well as the standard OSM files.

Most objects listed in the S-100 registry will be editable, whether on nodes, ways or relations (principally multipolygons). 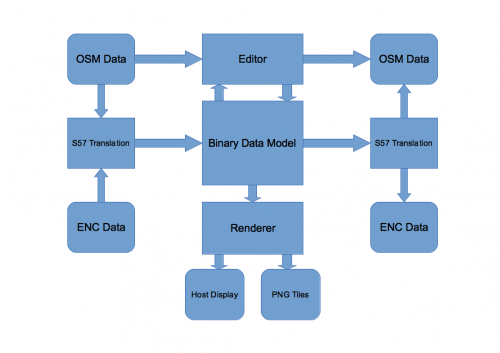 In this illustration, the top line (OSM input, Editor, OSM output) represents JOSM together with the SMED2 plugin.

The S57 translation blocks convert OSM data (and eventually S57 ENC data) to/from an internal binary model that is compatible with both OSM structures and the S57 chain-node model used by ENC.

The binary data model provides the inputs to both SMED2 and the renderer.

The renderer will provide the core engine for applications besides JOSM, principally our map tile generator, but also could be used in other applications, such as chart plotters.

The renderer's output is sent to the host display (the imagery layer in JOSM or an actual screen when the renderer is used in a chart-plotter application). In the Seamark layer rendering application, PNG tiles will be output.

We need all water sport specific objects and attributes. Additionally to the shortened S-57 objects, which in future/now will be expanded by the S-100 objects.

Light
The user would like to set a "lighthouse". In the users meaning this is a building or an other structure with a nautical light on it (but not a buoy or beacon). So he needs the possibility to describe the light character, and the structure and shape of landmark as well.
Additional things like radar, AIS, radio, etc. the users will search in "lights" too.
Storm warning lights the users will search in "lights" too.

Landmark
The user would like to set a "landmark". In the users meaning this is a building or an other structure with a nautical relevance as landmark. So he needs the possibility to describe the structure and shape of the landmark, and the function as well.
High buildings often are used to carry lights, and some radio features (aviation, telecommunication, radar, television, etc).

Old SMED is added by JOSM-Presets. They are also used in the transition peroiod to SMED-2. Later the presets will be integrated in SMED-2.

Designed: Markus. We need a Maintainer for.

Approved preset for all the whitewater stuff

The preset "Watersport" contains the well designed Canoeing-Preset for all the whitewater stuff.

The other wathersport classes are not very useful and need a redesign.