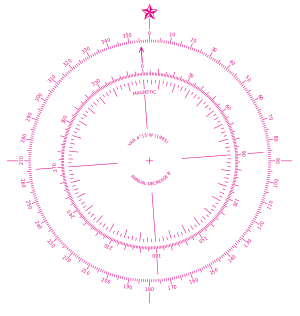 The tool "Compass rose" can be switched on and off via the menu "Ansicht" > "Kompassrose".
The compass rose appears in the lower right corner of the map.

The outer ring of the compass rose shows the geodetic direction on a true 360° scale.
The north marking agrees with the direction towards geodetic north on the map.

The inner ring of the compass rose shows the magnetic direction at the center point of the map; it has a 360° scale as well as a subdivition of the cardinal direction into 32 compass points.
The north marking agrees with the direction towards the arctic magnetic pole (the magnetic south pole which is located close to the geodetic north pole) on the map.
The inner ring therefore shows the image of a compass in the hand of a user located at the center point of the map facing geodetic north.

The magnetic declination (also called magnetic variation) is the angle between geodetic north and magnetic north with reference to location and time.
It is shown inside the compass rose in unit degree. 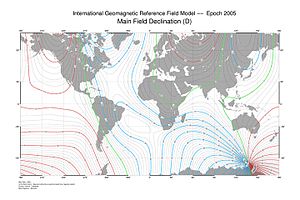 Locatons of the same magnetic declination can be connected by a line called isogone and be visualized in a isogonemap.

The magnetic declination varies in time at all locations.
The variation rate is given in degrees per year.
The animated isogone map shows the variations within the last 400 years.